The Downtown Commercial District of Albany began to grow soon after Albany's founding in 1848. Shortly after the Monteith brothers moved into their new house on the edge of the present downtown, they opened a general store. Other businesses soon followed. By 1878, downtown Albany boasted grocers, dry-goods stores, a wagon dealer, cigar stores, butchers, livery stables, a tailor, a "shaving salon," shoe stores, a printer, saloons, hotels, an agricultural implement dealer, and a furniture dealer who doubled as an undertaker. Many of the buildings and businesses seen in old photographs still exist, as the downtown district remains the civic, commercial and social center of Albany.

Starting in 1851, E.M. Briggs ran a ferry operation across the Willamette from the foot of Ferry Street. The ferries charged 12.5 cents for foot passengers, 20 cents for horses and mules, and 75 cents to cross the river with a wagon and team. 100 pounds of freight cost 5 cents. The Albany Steel Bridge replaced the ferry in 1892. The footings of the bridge are still visible, carrying power lines across the river.

The first steamboat called in Albany in 1852, and the downtown district quickly developed into the mid-valley riverboat landing. By 1866, five riverboats owned by an Albany man made regular trips between Albany, Corvallis and Portland. Remnants of this era of river travel still exist in the former riverbank warehouse and steamboat landing located at the foot of Broadalbin Street. Constructed in 1866, Avery Mill located at 213 Water Street, is the oldest surviving building along the waterfront. It was first used as a warehouse and converted to a flourmill in 1877 and also served as a ticket office or the ferries.

During Albany's early commercial building period, impressive and ornate structures sprang up downtown. Built in 1887 by Judge L. Flinn, the Flinn Block, located at 222 First Avenue, boasted one of the most ornate French Second Empire facades in the Northwest. It was originally the First National Bank and later the L.E. Blain Clothing Company. The S. E. Young building was also built in 1887 and was moved to its present location at 136 Lyon SW by teams of horses in 1914.

Design guidelines have been developed for the Historic Downtown and are available at City Hall in the Community Development Department.

The Hackleman District contains 228 properties within about 28 city blocks. The District is named after Abner Hackleman, a farmer from Iowa, who in 1845 immigrated to Oregon by crossing the plains with ox teams. Hackleman settled in the area that became the Hackleman Historic District. During the winter of 1845 Abner Hackleman took up the donation land claim, which is known as Hackleman's Addition in Albany. Hackleman laid off 70 acres of land for the first addition, and this was followed with three more additions now totaling over 100 acres.

Other immigrants began arriving and Mr. Hackleman hired Hiram N. Smead to hold another claim for him until his son arrived from Iowa. Only a year after arriving in Oregon, Abner died while returning to Iowa to fetch his family.

In 1847, Abner's son Abram relocated his father's claim and built a log house in an oak grove still known as Hackleman's Grove. He later built the house that still stands at the corner of Fifth and Jackson.

In 1853, residents of the newly-settled district had enough influence to persuade the Territorial Legislature to change the name of Albany to "Takenah," a Kalapuya word describing the pool created by the Calapooia River as it meets the Willamette. Certain irreverent old-timers translated the new name as "hole in the ground." This seemed unsuitable for the aspiring community, so it was changed back to Albany in 1855.

The Monteith District, located on the west side of downtown Albany, is named after Walter and Thomas Monteith, the founding fathers of Albany. After arriving in Oregon from New York in 1847, these two brothers bought squatters rights to a claim held by Hiram Smead for $400.

The Monteith brothers completed the first frame house in Albany in 1849 and much earlier history centers around the Monteith House. Albany's first indoor sermon was preached in the house, Indian treaties were signed there, and in 1856 political leaders met there to establish the Oregon Republican Party. The Monteith House, now restored, is open as a museum.

During the mid-1800's, the Monteith's and the Hackleman's were literally and politically on opposite sides of the fence. Residents of the Monteith District were mainly Republican merchants and professionals with Union sympathies. The Hackleman District residents to the east were mainly working class Democrats who sided with the Confederacy. They even went so far as to plant a hedge separating the sides of town near Baker Street.

In 1851, the Monteith family built and owned the Magnolia Flouring Mills along the Calapooia River. With the mill in operation, the first boat ever to travel the upper Willamette River, the "Multnomah", arrived in Albany, thereby increasing Albany's shipping potential for the manufacturing and farming industries.

The Monteith Historic District was placed on the National Register of Historic Places on February 29, 1980. The time period of significance for all of Albany's historic districts was expanded in 2000 from 1849 to 1915 to 1849 to 1945 to capture resources and architectural styles constructed between 1915 and 1945 that reflect the growth and development of Albany. The Monteith District was expanded in November 2008 to add 78 properties on the southwest corner of the original boundary to include a cohesive collection of early to mid-twentieth century residential buildings. Many distinct architectural styles grace the District. Included are Federal, Craftsman, Classical Revival, Gothic Revival, Italianate, Queen Anne, French Second Empire, Stick, Eastlake, Colonial Revival, Rural Vernacular, Transitional Box, Bungalow, American Renaissance, Depression/WWII Cottages, and eclectic hybrids that combine elements of these styles. 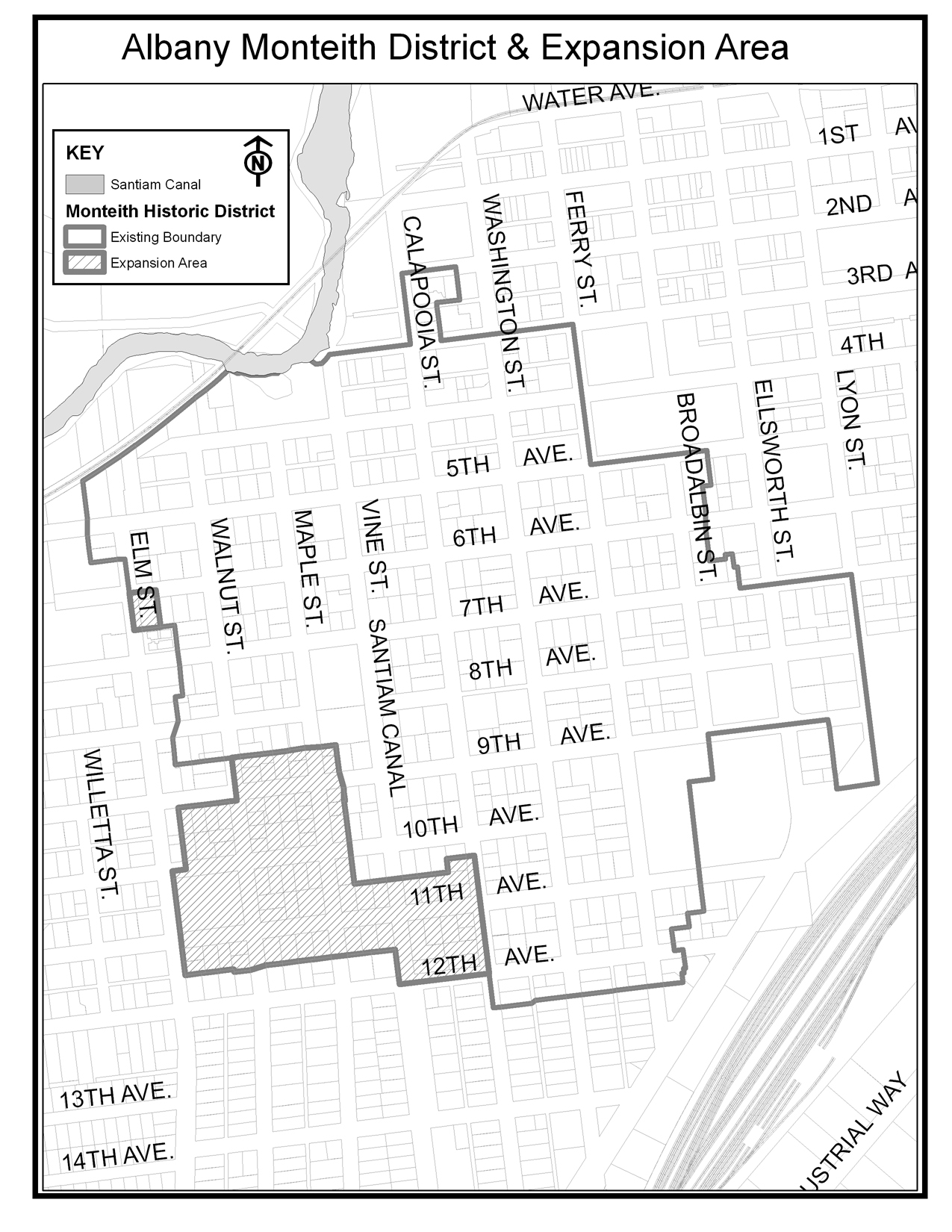 A portion of the Albany Municipal Airport is also listed in the National Register.

The Community Development Department is made up of the Building and Planning Divisions.

The Building Division helps ensure the safety of our community's buildings and compliance with state code standards.

The Planning Division makes sure Albany has attractive environments to live, work, shop and play in.