The Albany Heritage Tree Program was established to recognize, foster appreciation of, and protect trees having historic significance to our community. Trees cool our cities, fight pollution, beautify our neighborhoods, provide habitat for wildlife, and quite simply, create a more livable community.

To be considered for Heritage status, a nomination for the tree must be submitted to the Tree Commission. If the nomination is favorably considered and the owner is in agreement, the tree will be designated a Heritage Tree. The program is completely voluntary and the City does not assume authority over the selected trees. Call 541-917-7777 for details. 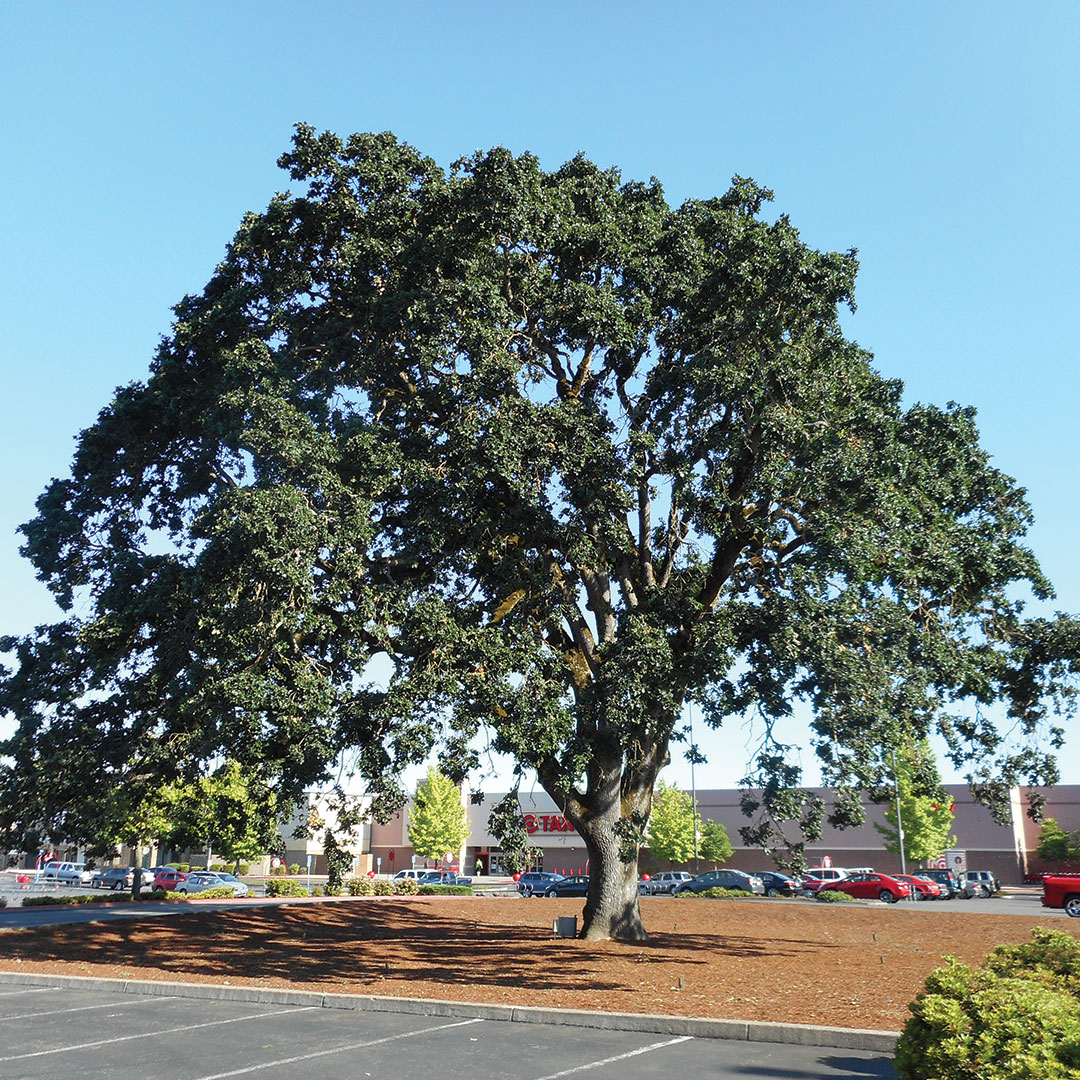 With a trunk circumference of 12.5 feet and a crown spreading approximately 90 feet, one of Albany’s greatest oaks is appropriately showcased at Heritage Mall on SE 14th St. Showing tremendous foresight, Roebbelen Engineering Inc. preserved the Oregon white oak in the Heritage Mall’s design plans in 1988.

At the turn of the century, the prominent Burkhart family owned much of the pastureland surrounding the oak but the exact age of the tree is unknown. The age is conservatively estimated at a minimum of 150 years old.

Tom Lundberg, from Shade Tree Landscaping, recalls delivering notes to his friends during the 1950s by placing the letters in the hollows of the large oak, hence the name, “Messenger Oak”. It is fitting that Tom, for the last seven years, has held the contract to care for this truly magnificent and historic tree. 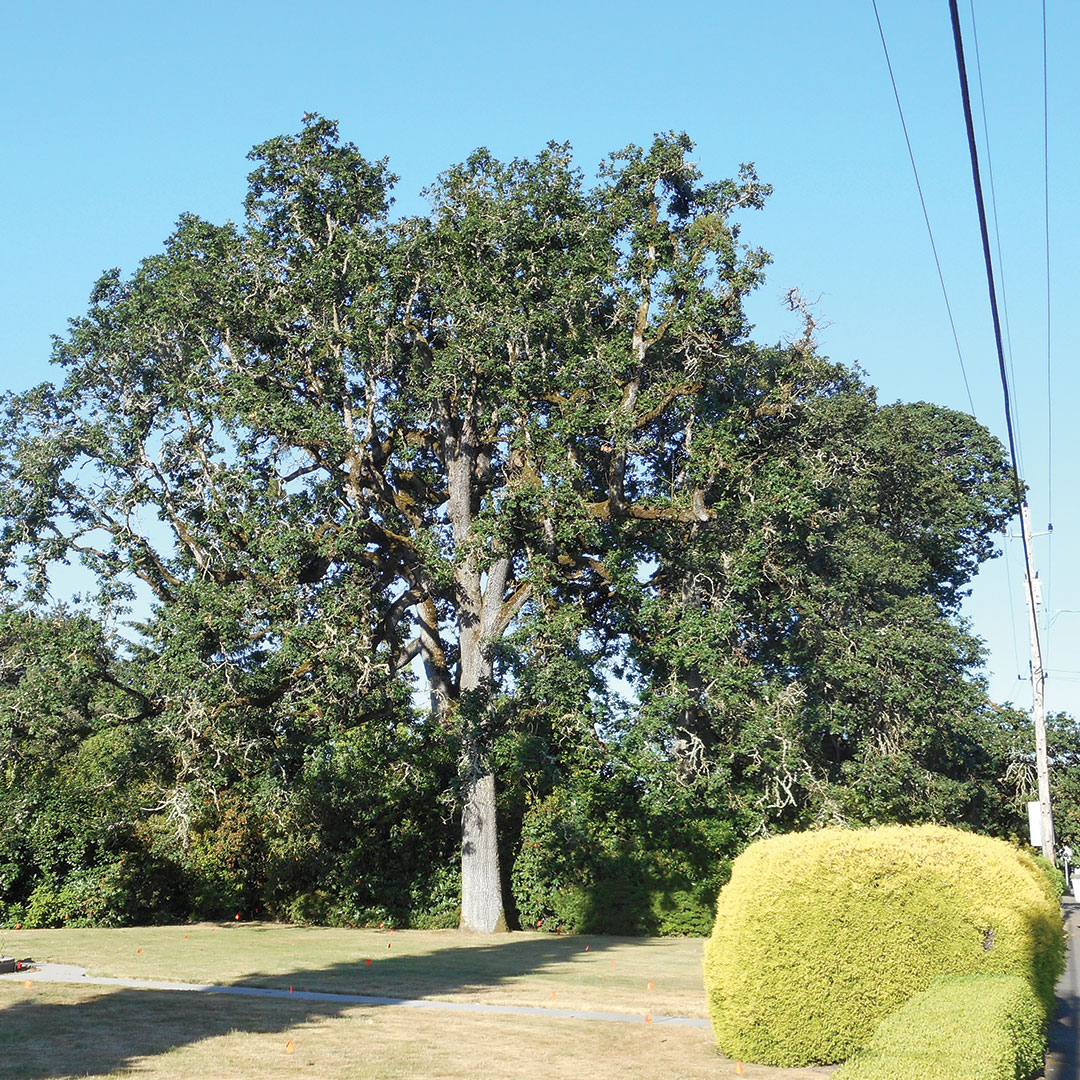 With a trunk circumference of over 12.5 feet and a crown spreading approximately 60 feet, this white oak is appropriately showcased at the Historic Burkhart home along the Heritage Burkhart Grove. The remaining trees from this grove are large, have thick corky bark and slow growth rates. These trees are estimated to be between 200-250 years old.

This part of Albany was first settled by John Burkhart. John was born in 1787 and came to Oregon on the Oregon Trail arriving in October 1847. The Burkharts were one of three founding families of Albany, the other two being the Monteiths and the Hacklemans. 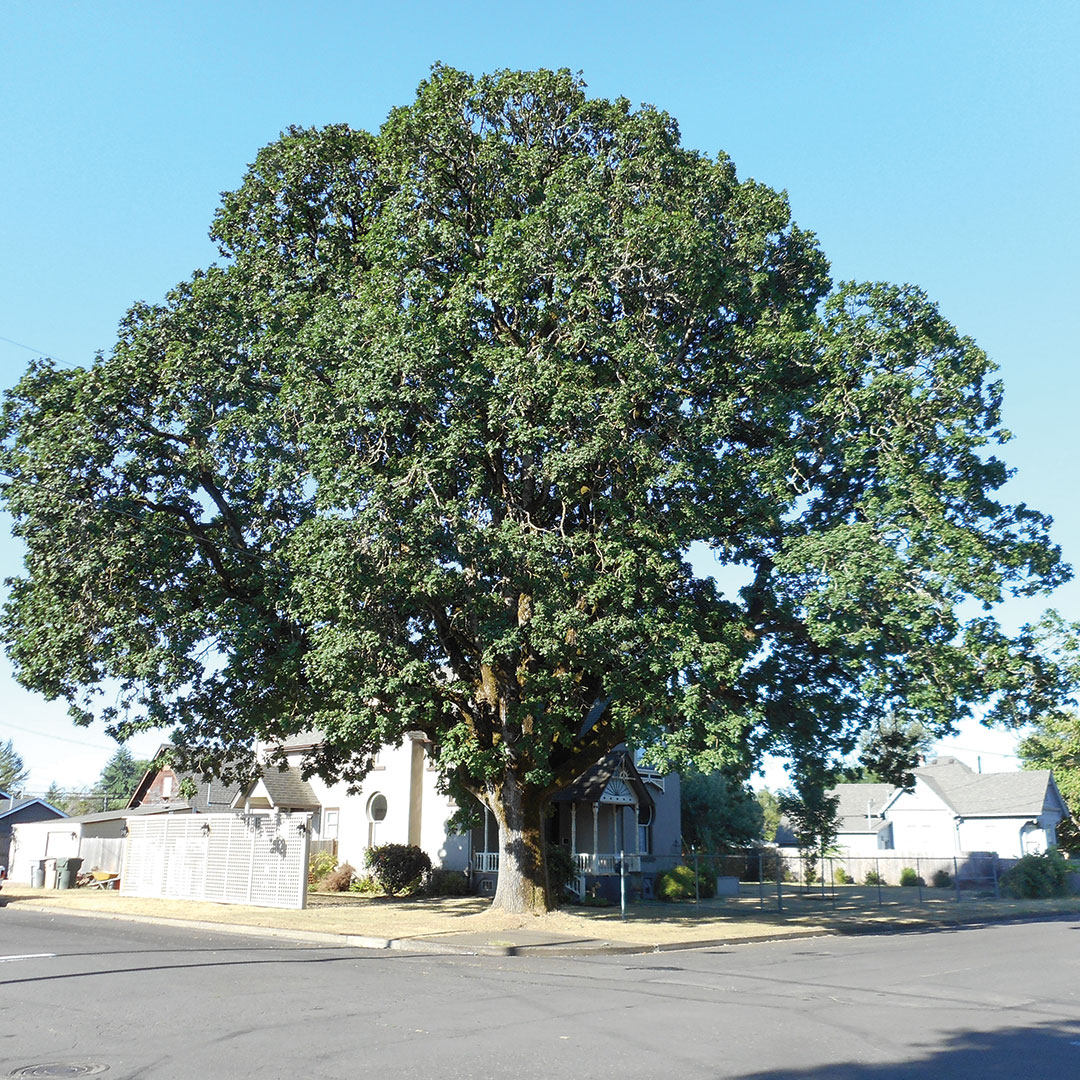 This white oak has a trunk circumference of 10 feet and a crown spreading approximately 40 feet, and is part of the Hackleman Grove. This tree has the classic oak savannah growth habit with a broad symmetrical umbrella shaped crown. This type of growth occurs when trees grow out in the open and are not crowded by adjacent trees. This growth form is an ideal complement to the historic “Keyhole” house which the tree is growing in front of.

The “Keyhole House”, named for the unique “Keyhole windows”, dates back to 1892 and is now dwarfed by the huge white oak which was certainly present when the home was built. The late magician Jerry Andrus lived in the house that now is owned and has been restored by Emma and Jacho Eaton. Andrus’ brother, George, still lives next door to the house he grew up in. 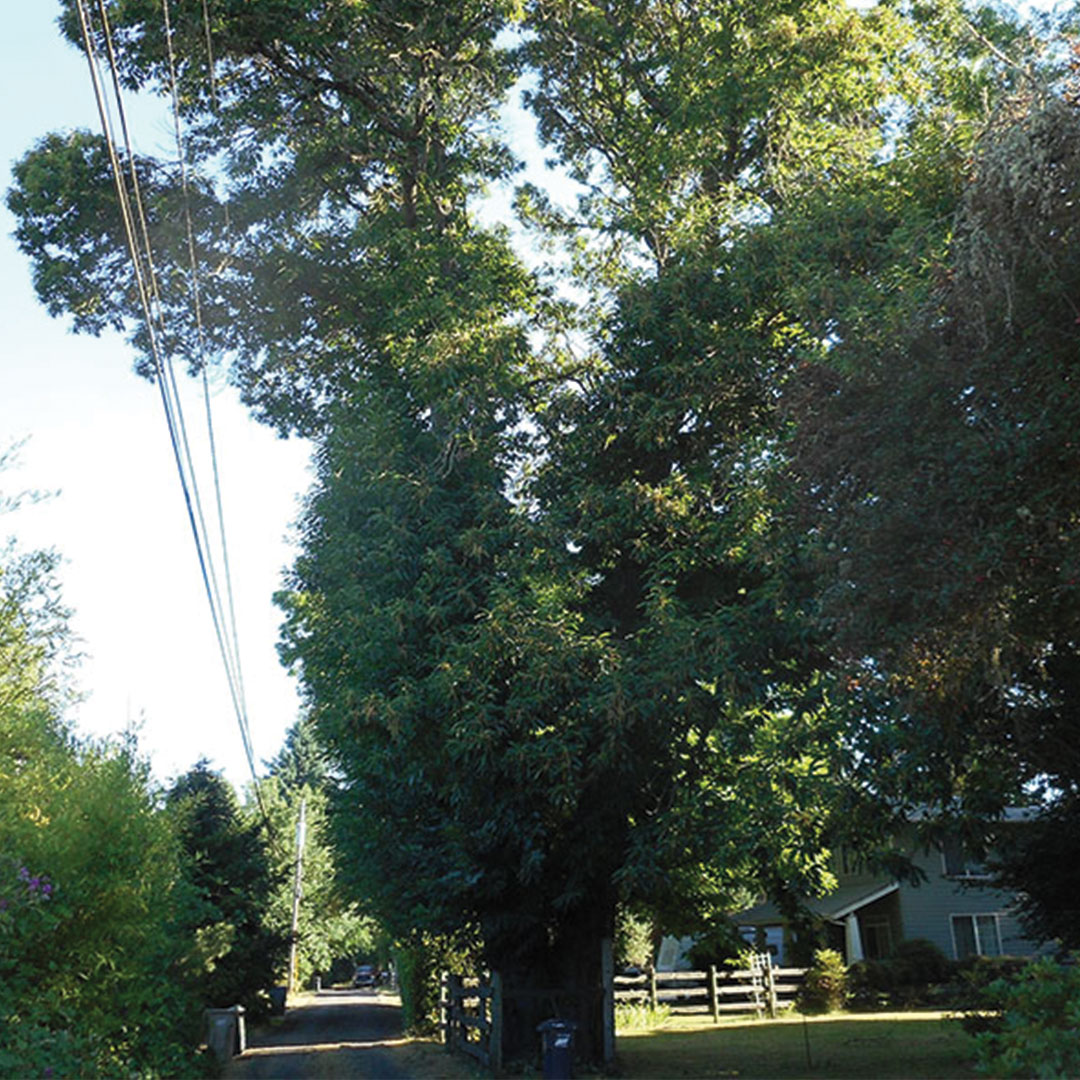 The American chestnut may well have been the most important hardwood in North America. However, chestnut blight, a disease caused by an Asian fungus, was first identified in 1904, which then spread for 50 years across the chestnut’s native range, removed the chestnut as a dominant species. The American Chestnut in north Albany is a survivor of the disease. Most likely, the parent chestnut was planted during Albany’s early days. Root sprouts commonly grew around the base of the trees after infection. If proper sanitation efforts were taken, the new sprouts could grow successfully. This explains the multi-stem structure of this chestnut tree. 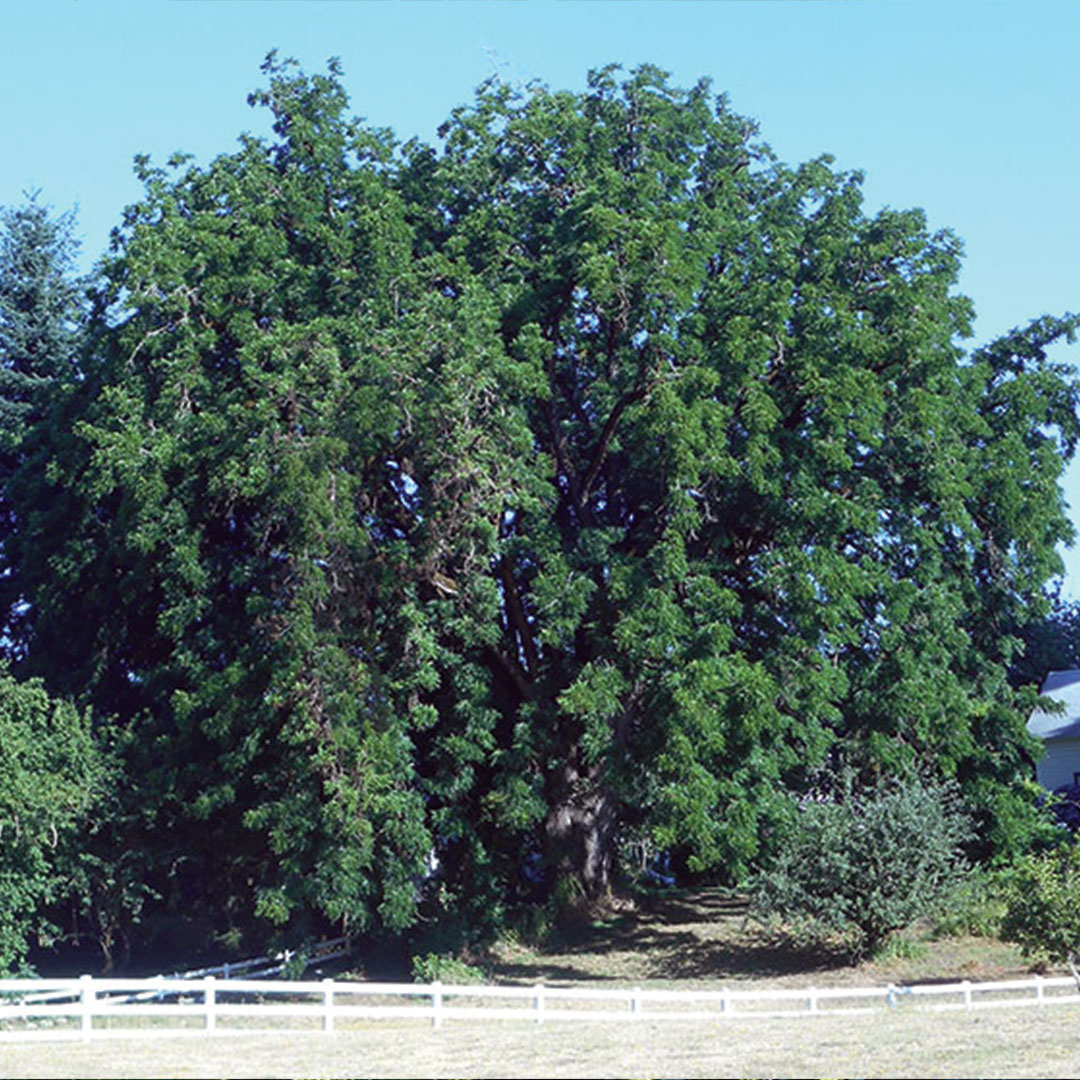 This tree is considered to be both one of the oldest and largest Black Walnut trees in the State of Oregon. The tree measures 83 inches in diameter (22 feet in circumference). The home it sits adjacent to was built in 1889. This walnut tree is at least as old as the house. For many years the nuts from the tree have been harvested for propagation, and it’s said the tree is the mother to over five thousand seedlings. 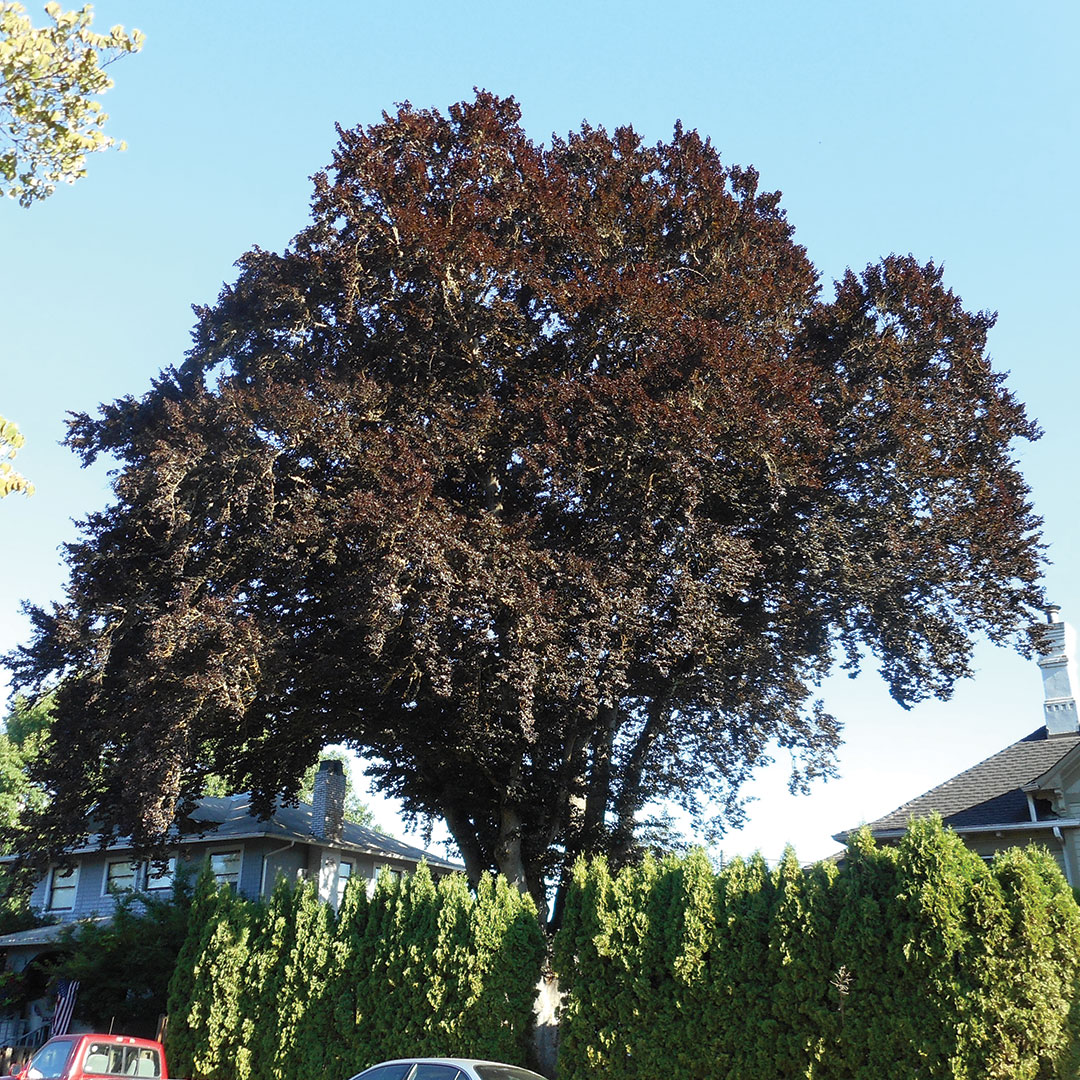 Nestled between two historic homes in the Monteith District, this majestic copper beech is one of a kind. It is a purple-leafed variety of the Northern European green beech and was probably planted around the turn of the century. Even with its impressive trunk measuring 11.5 feet in circumference, the beech fits beautifully into the residential neighborhood.

The “Pfeiffer House” was built in 1900 by the prominent Charles Pfeiffer and his wife Catherine as a retirement home. The couple moved here from Pennsylvania and established the Revere House Hotel—“one of the most popular in the valley” according to the late Albany historian Fred P. Nutting. The home itself is in the Queen Anne style and is notable for its many fine architectural details. 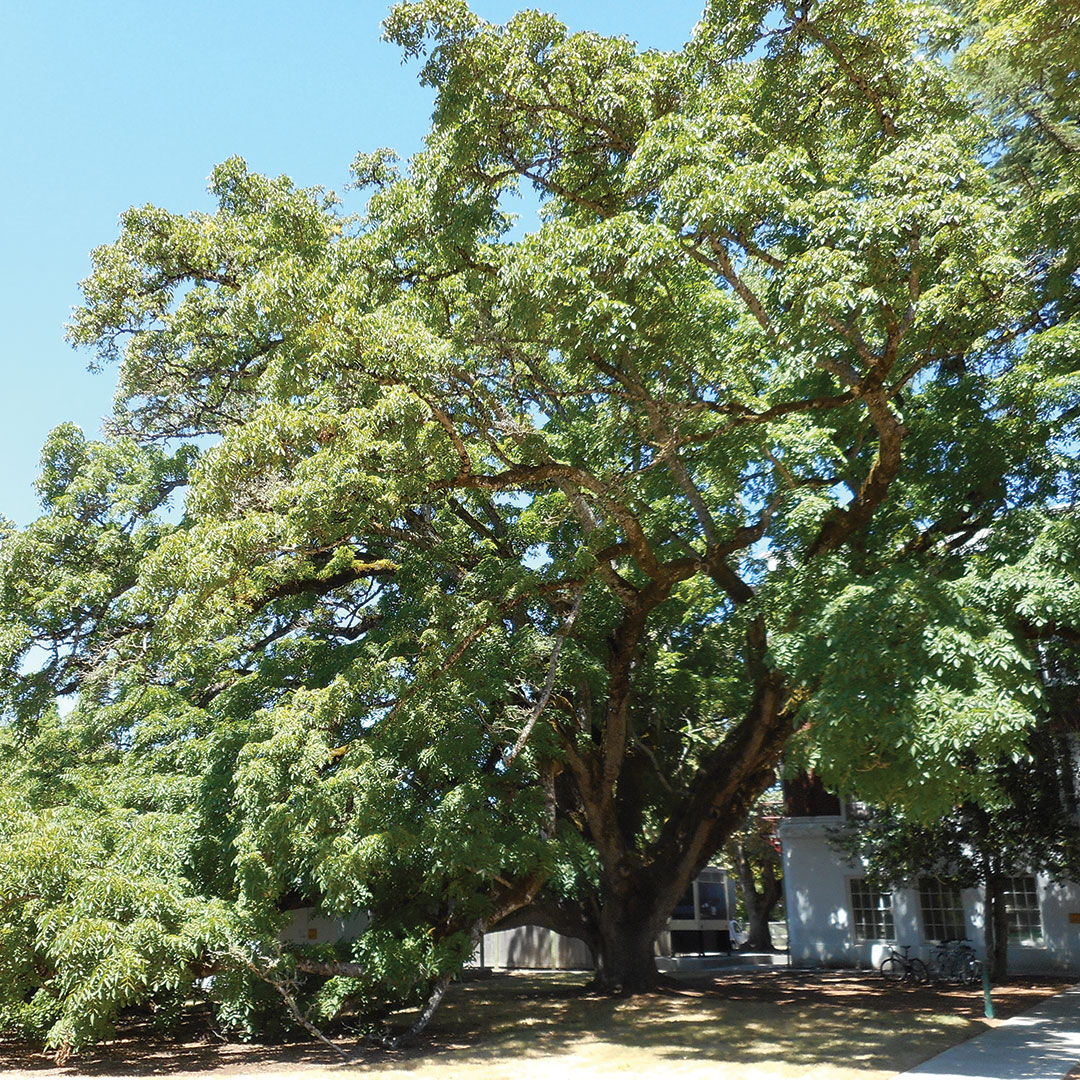 With a trunk 15.5 feet in circumference and a crown with an approximate spread of 110 feet, this Persian walnut is one of nature’s finest creations and one of Albany’s treasures.

Located on the wooded grounds of the U.S. Department of Energy, Albany Research Center, the walnut has an interesting and well-documented past. From historic photos provided by Stephen Anderson of Images Unlimited, the site at 1450 Queen Ave. SW can be traced back to roughly 1899, where a small wood-frame home and “Albany Nurseries” were located. In 1925, this site was dedicated to Albany College. Historic photos clearly show the walnut on the South side of Bldg. 1 at this time. During the period 1942-1996 the U.S. Bureau of Mines operated on the site. This tree is truly a sight to behold. 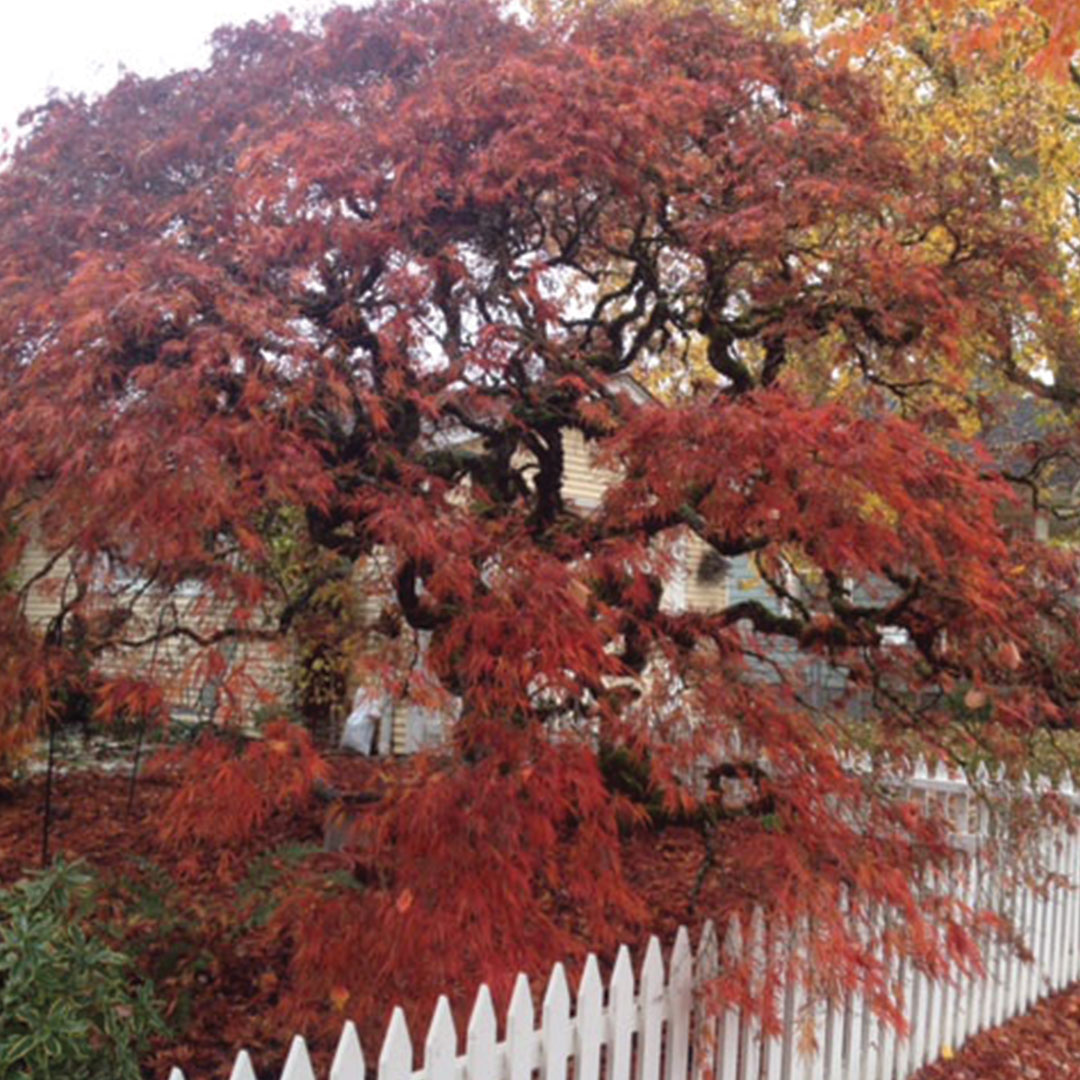 This Japanese maple tree is the largest of its kind in Albany.

With a spread of more than 20 feet and a height of 15 feet, it is obvious this tree has been around for a long time. The contorted branches and cascading canopy add sculptural beauty to the entrance of a historic home built and lived in by David Blain. Blain was the owner of the Blain Clothing Company in downtown Albany, which was in business from 1892-1976. When Blain first built this house in 1906, he probably planted the tree around that time, as well, making this tree approximately 100 years old. It is in excellent condition and has beautiful dissected foliage that turns vibrant red in the fall. This Japanese maple is the most recently added heritage tree, designated in 2015. 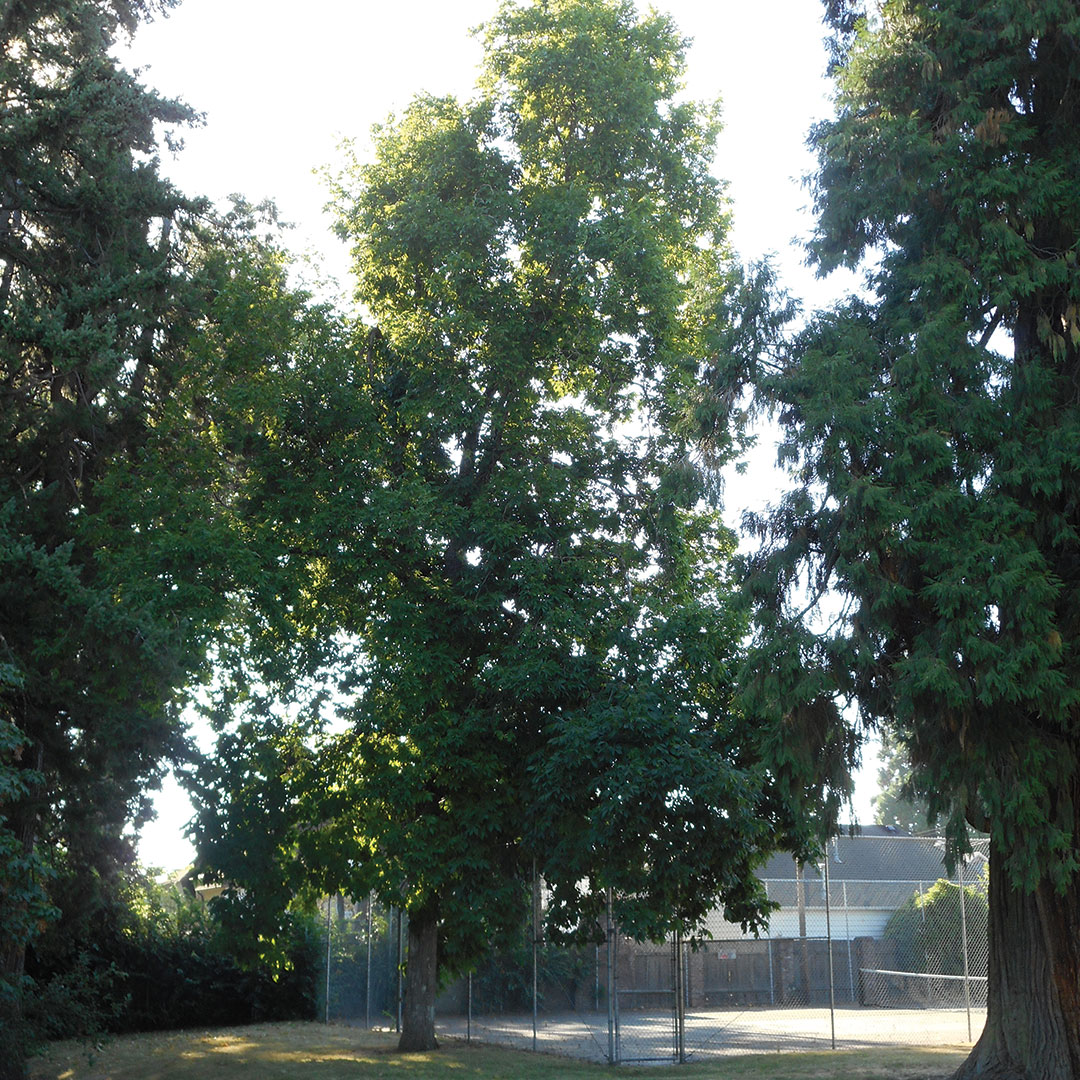 At first glance, this shagbark hickory situated among the cedars at the North end of the Henderson Park tennis court might not seem like anything special. However, it is very rare in Oregon, probably the only shagbark hickory in Albany, and is likely very old.

One of the earliest property owners, Johnny Irving, was a leading businessman in town. Mr. Irving was also considered a “lawn artist” who transformed the property into “what many thought was the prettiest place in town,” according to the late Albany historian Fred P. Nutting.

The last owner of the home was Miss Maud Henderson who willed the property to the City. She died in 1935 or 1936, and shortly thereafter Henderson Park was created. Many of the still standing large trees can without a doubt be traced back to Johnny Irving, the “lawn artist.” This may be true for the Hickory as well.

We promote healthy living through recreational experiences and serve as stewards of Albany's public parks and facilities.